Intuition as a guide

A series of conversations about marketing, management and brands between CEOs of major advertisers / major advertising agencies with Lodewijk van der Peet. On this occasion we have Debbie Klein, CEO of Kwantum and Leen Bakker.

On my way to Tilburg, I tell photographer Kees Rijken that I met Debbie Klein in 2014. At the time I worked for the advertising agency that made the Beter Bed campaigns. It was announced that a new director of purchasing/marketing was coming. The then CEO Ton Anbeek told that Klein did not yet have that much marketing experience, but that she was a great commercial talent. That’s why he wanted to give her two hats.

The changing of the guard on marketing usually also heralds a change of the advertising agency, so I was wary. At the first meeting, Debbie immediately makes it clear what her agenda looked like: ‘For now you don’t have to worry, as long as you deliver’. About four years later, Anbeek left for Accell (which we will soon be driving to) and it was immediately clear to me that Klein was the ideal successor. I don’t know what inspired the board at the time, but it didn’t work out well. The listed company quickly found itself in dire straits. And Debbie, she didn’t say a word about it and chose the Home Fashion Group. Kees listened with half an ear: ‘So she’s quite photogenic?’

In 2018, it was communicated that Klein was to become the CEO of Leen Bakker. In 2020, it was formally confirmed that Kwantum would also come under her rule. The two brands were merged ‘at the back’.

Adjusting the volume knob
We made an appointment at Kwantum’s head office, which was completely renovated a year or two ago and offers the employees a pleasant working environment (if they come to work in the office) in the middle of a huge industrial estate. I open with a quote she gave me once. ‘Yes correct. Life’s too short to work with assholes. I have indeed said that. This especially applies to the people I spend a lot of time with and work closely with.’

She considers her own words for a moment, then shifts something. “I sometimes underestimate the impact of what I say. Or maybe it’s how I say it? In my head it makes sense, but I see that sometimes it hits much harder than I intended. I’ve stayed the same person, but sometimes people only see a CEO, I sometimes forget that. I think every manager has suffered from or suffered from that, you have to learn to readjust your volume knob in every new position.” 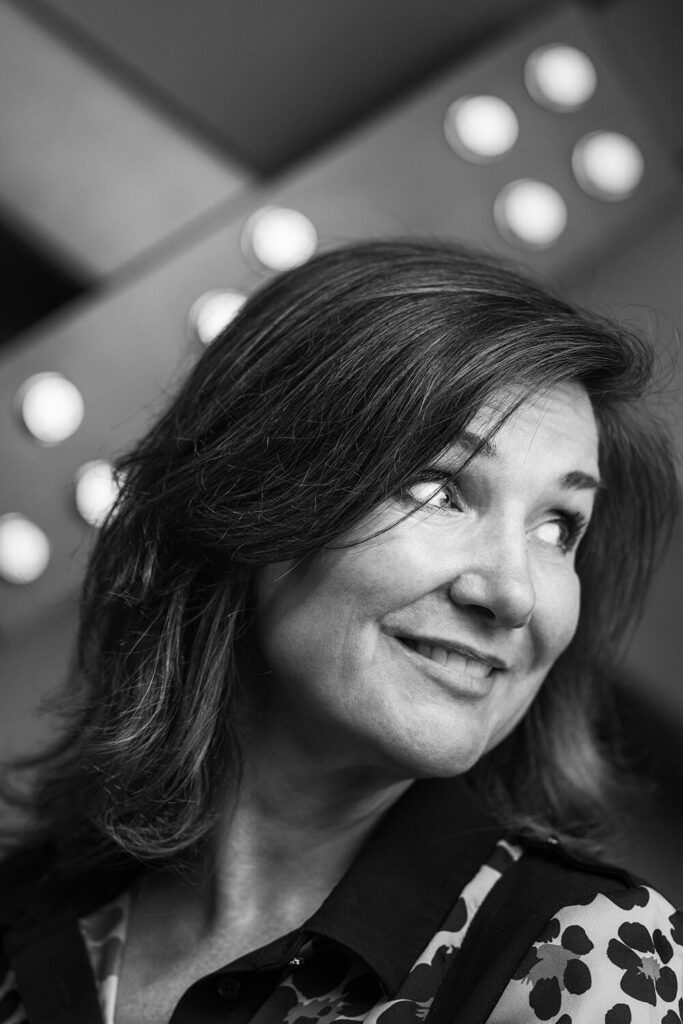 Intuition
‘Am I a real marketer? Well, I’m a buyer who got a taste of the marketing profession. My primary task is of course that I can represent these two beautiful brands. Fortunately, we have marketers in-house, Matthijs Moeken is our CMO, on whose expertise I rely. Sometimes my intuition tells me that things have to change, then I act on it.” I know Debbie’s intuition, she can decide in the blink of an eye. “No, I’ve never regretted that, they were usually my best decisions.”

Brand Policy
“Kwantum stands for dressing and Leen Bakker stands for dressing your house. You can also find curtains at Leen Bakker and home accessories at Kwantum, but the accents have clearly changed and have become more prominent in recent years. That was clear from time immemorial, Kwantum (with an Amsterdam accent), once Kwantum halls, was closer to the hardware store and Leen Bakker (with a Rotterdam accent) always stood for affordable interiors.’

Life’s too short to work with assholes.

Solution and product
Like hardware stores, Kwantum opens small branches in the city. The first has just opened in Amsterdam. The idea is, of course, that Kwantum will be closer to its customers in the areas where the customer so requests and they no longer want to drive to a residential boulevard. “It is a store where we want to learn a lot. But I predict it won’t stop at this store. For example, they come to pick out a roller blind that we can measure and hang for them. The product and the solution as one, that is the future.”

The impact of COVID
“Our domain has grown from one day to the next. Where we were traditionally allowed to furnish or clad the living and bedrooms, everyone suddenly wanted the ideal workplace at home. When looking for a new house, for example, it has become a very important criterion whether there is a good office. We have adapted our range with both brands and offer many solutions. I expect it to remain that way for the most part, we won’t be back in the office again soon. You can also see at our office that they have become meeting places rather than workplaces.”

Teachers
One of my regular questions in this series is whether there have been marketers in the past that they still think about when big issues arise. Klein has to think about it for a moment, but then suddenly her eyes start to glow a little. “Ton Anbeek! During my career I had the opportunity to work with many good marketers, but because Ton gave me the space at Beter Bed to do marketing and communication in addition to purchasing, it was a good learning experience.’

Loyalty and CRM
BrandBase (the agency that mainly makes reward campaigns) has asked me to provide this series of interviews for Marketing Tribune. The aim is of course to bring the power of loyalty and rewards as a marketing instrument to the attention of the CEO and you, the reader. “You would think, you only buy a bed once every ten years, so if you’ve managed to sell one, you’ve lost that customer for ten years. But that’s not the case at all. If you note in which phase of life the buyer is, you can make a lot of predictions. For starters, you should buy new pillows, regular duvet covers and fitted sheets every two years, but if you sell a cot, you just know that a teenage bed is coming in not too long, and again later a grown-up bed. It is the same with interior. That sofa only goes out after seven years, but you replace those cushions much more often. We are increasingly using data to predict what purchasing behavior will be like and adjust our marketing efforts accordingly.”

We increasingly offer solutions instead of products

Digital media
“We are spending an increasing percentage of our budget online.” I interrupt Klein and ask if she has any idea if that budget is going well, the reach of every medium is “measured” by an independent party, except the big internet giants. You just have to trust their blue eyes that the figures given are correct. I am making a threatening speech about adfraud. I find myself telling her nothing new. And she also has a clear answer to this: ‘As long as we can establish direct relationships between spend, reach and sales and that has a positive effect, then it is an effective channel for me.

Left and right hemisphere
My management style is that I think I have a very nice balance between ratio and emotion. Neither of them insist on priority. I can be content hard and goal oriented with a sharp tongue if necessary. If you were on the football field with me and you let a ball through three times, you will hear that clearly from me. Very simple. At the same time, I’m very interested in people and curious about what else keeps you busy than just work.’

In 5 years
Debbie Klein ponders for a moment and finally comes up with a safe answer. “I’ll be here in five years. I hope that we will convert more than a billion (more than 700 million in 2020) and that we will then be active in more European countries. In addition to offering people an affordable, pleasant home with our range, we may be able to further increase our social relevance by giving the old interior a new destination for people who are having a hard time. In ten years?’ Now Klein is willing to take a little more risk; ‘Then I might work with young people, I have a ginger brewery or no, I do this kind of work abroad.’

Debbie Klein started working as a Material Requirement Planner after graduating in business administration. Then at Nike as a Footwear Forecast Analyst and later as a buyer. After Nike, she went to Adidas in the Netherlands and the UK. In 2004 she joined V&D where she was appointed Buying and Merchandising director. In 2012, she became Buying Director Women’s world at Karstadt In Germany. Two years later she went to Beter Bed. In 2018, Klein was appointed CEO of Leen Bakker.