A series of conversations about marketing, management and brands between CEOs of major advertisers and leading advertising agencies and Lodewijk van der Peet. This time: Ton Anbeek, CEO of the Accell Group. 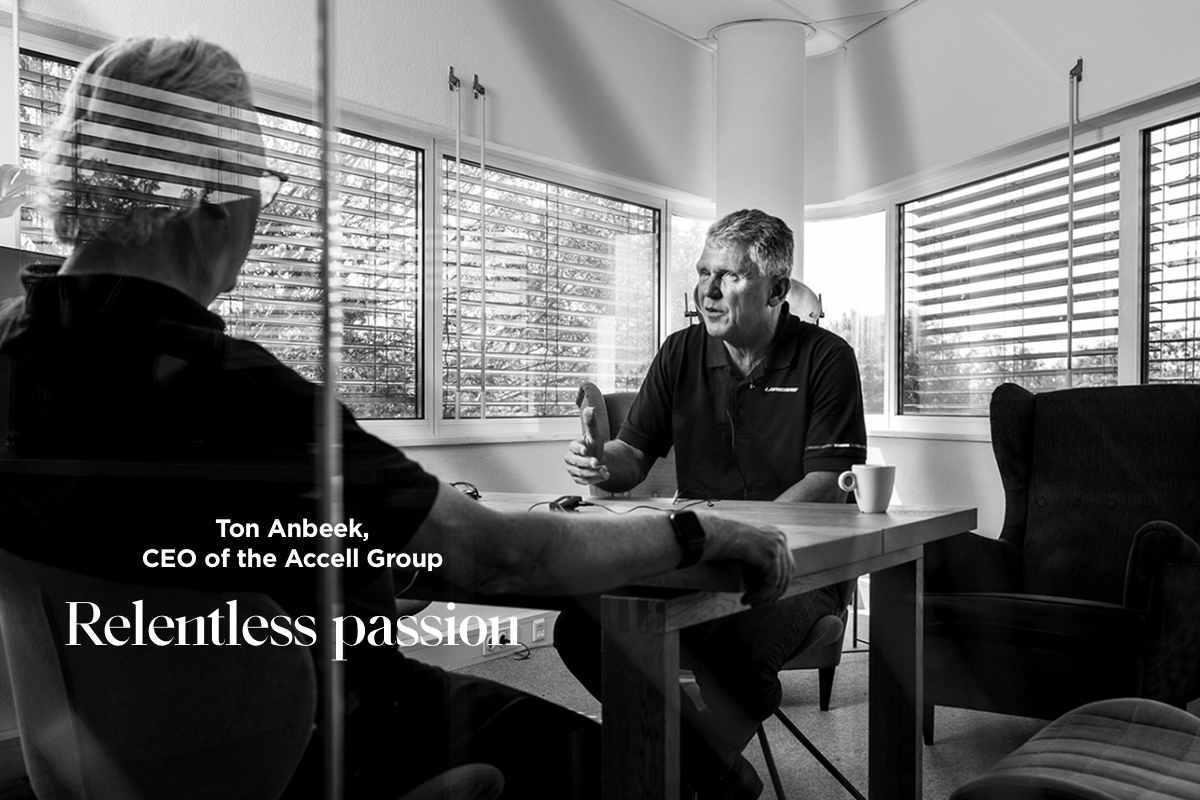 Advance warning: I have known Ton Anbeek for more than ten years and I’m a fan. Anbeek is a driven marketer who’s ended up in the right place: he took on the general management role early on in his career, but in my eyes he still steers his ship in the style of a commercial marketing man. As he talks to me about his communication strategy experiences at Unilever and bed manufacturer Auping, his eyes glisten.

We arranged to meet at Accell Group’s office in Amsterdam. “It’s a waste of time that three-hour drive, and you’re not missing much, my office in Heerenveen (where his head office is located) is rather boring.” This is typical of Anbeek – he has the stature and authority of a CEO, but in no way has that gone to his head. He’s standing around having an argument with the coffee machine; it doesn’t seem to occur to him at all that you might actually have staff for that kind of thing. Beforehand, he sent me a lot of photos of himself and the factory, “Saves you a few cents, right?” I explain to him that Kees’s photos are an important part of this series. “OK, it’s up to you!”

Unilever as a training ground
“I wanted to start at a good training ground for marketing, and preferably in the area of sales, so after studying Organisational Psychology in Utrecht and Business Administration in Rotterdam I applied for various jobs, including the one at Unilever. I’ve taken all of that with me wherever I’ve worked, and always enjoyed the benefits. In a period of almost twenty years I held various posts in a range of different countries. I lived in London for a while. I was global marketing director there, responsible for the fabric conditioner division (Snuggle and Comfort) and later, in Casablanca, I was CEO North Africa. I also had the chance to blaze a trail in e-business. To put it briefly, it all began with marketing and eventually grew more and more general. But I’ve never really lost it completely. My basis was and remains that of a marketing man.” Then he adds cheekily, “And a salesman.”

I found some real pearls there, but they just needed someone to thread them together on a string.

Stepping in
“I’m on top of the facts, on top of the operation. In the commercial field especially, it’s part of my nature to be on top of things.” I respond, “That strikes me as not particularly good news for your CMO. I’d assume they’d like some room to manoeuvre.” Implacable as ever, Anbeek continues, “We don’t have a CMO at Accell anymore, and back at Auping I don’t think I hindered them at all. In general, I give a lot of room and freedom to enterprise and initiative, subject to a certain kind of limitation. When the results are good then, of course, I give that space more readily. There are a few rules, all very simple: you can make mistakes, as many as you want, but not the same ones twice and preferably not stupid ones. If the desired results don’t emerge, I will of course be stepping in. For the rest, I’m always easy to approach, my door is open, and I’m more than happy to listen. I appreciate it when people come to see me, and I also encourage them to do so. After all, even though I’m saying it myself, I do have a fantastic sense of humour!”

The USP makes the difference
“I got a great job as general manager with Auping at the beginning of 2007. The company and the brand had lost their way a little and were making a loss on a turnover of just under 50 million. Within three years we had brought that up to around 75 million, with record profits and shareholder dividends. That had everything to do with the brand positioning and advertising campaign we started. Instrumental arguments – about ventilation – communicated in an emotional, impactful way. Each commercial we produced saw sales shoot up by about 20 percent; it was a huge success. There were only two really well-positioned brands: Hästens and Tempur. Hästens (‘horsehair’) was already on the decline, while Tempur (‘no pressure points’) was doing well. The ventilation proposition we had made the real difference. We also built up our own retail outlets with the Auping Plaza franchise formula, and that’s how I first gained experience in retail. And we launched our web shop, which was really something new at the time. Back then also, we even started thinking about making the production of mattresses ‘cradle-to-cradle’. Some 30 to 35 million mattresses are thrown away each year in Europe. I came into contact with Michael Braungart, one of the authors of the ‘cradle-to-cradle’ book. He predicted it would take ten to fifteen years to solve this very complex problem if you were working on the premise that there mustn’t be any cost-price increase. It was great to see Auping introduce that mattress last year. They did it in a fantastic way. Profit and planet came together very nicely there.”

The e-bike tax benefit arrangements for employers and employees in the Netherlands are poor.

Implacable
It’s not easy, no, I have to be honest: I have never succeeded in catching Anbeek off guard.  It’s something that you try to do, of course, especially as an interviewer. Sincere compliments or provocative comments, his friendly conversational tone never changes, not a decibel. When he talks about other people his words are – by definition – positive. I have never been able to catch him engaging in gossip. Never heard him sneer at, for example, a successor who once slated him in the press. Anbeek doesn’t waste words on things like that. Yet I was really upset about that incident and felt inclined to stand up for him.

Examples
His great examples? After a brief moment of reflection while he surveys the tiles on the ceiling, a eureka finger goes up, “David Arkwright! He came up with the ‘Dirt is good’ strategy for Omo and it has done the brand so much good! A brilliant marketer. And then of course Frank Weijers, I admire him too, he took Robijn to the market leader position; very clever.”

Repairs
In my view, there are – roughly – two types of manager: the turn-around manager and the one who keeps the ship going full steam ahead. Anbeek had to carry out quite a bit of repair work at Auping, Beter Bed and Accell, so isn’t he almost done at Accell now after almost four years? I realise that the CEO of a listed company can’t really give a frank answer to that question, and I see his body language stiffen slightly before he recites a seemingly well-practised text: “Working on the sound foundations laid by my predecessors, we and our very good team have gone on building the business up successfully and have made the company more competitive. The key words here are focus, simplification, speed, synergy, innovation and professionalisation. And all this is centred on a very inspiring corporate purpose: Cycling moves the world forward!” The light-hearted corporate purpose film, which features Anbeek himself and his Accell colleagues, brings this theme to life.

‘It could be Better’ 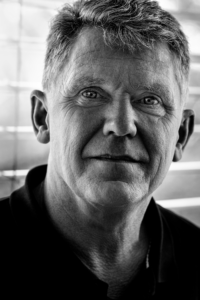 “Although the Beter Bed (Better Bed) formula was still proving successful around 2010, it had become a bit dated and old-fashioned, and nothing had been done yet about e-commerce, so that was a fantastic challenge. We went on to develop that business rather successfully, working with a great team that included Debbie Klein. Debbie had a retail and e-tail background, so we complemented each other well. After seven years I felt it was the right time to accept the attractive invitation I received from a head-hunter. It was logical, also in terms my age. When you’re past 60, people generally don’t ask you for these kinds of jobs anymore.”

Repeat
“Together with our dealers, we collect a lot of data, and we work well together in that regard. That’s how we map out the customer journey.” I try to tempt Anbeek to tell me more: “By not selling bicycles, for example, but lifetime bike subscriptions instead?” Anbeek laughs but won’t say anything more than, “Who knows?”

Accell
“I found some real pearls (companies and brands) there, but no one had ever thought of threading them together on a string. There were loads of synergy and simplification opportunities. There were also a number of channel conflicts in the Netherlands and the United States that had simply gone way too far and were costing a lot of turnover and profit. In the beginning it wasn’t so easy to disclose certain things. Things like the 20 million loss we suffered in America on 60 million turnover, which nobody outside the business knew about, to mention just one example. I came under considerable fire for that; not the kind of thing that wins you any popularity prizes. But I felt I had no choice. We had dozens of brands, and they were buying their parts independently, not working together. Often, they were even competing with each other! So it made perfect sense to optimise the supply chain and marketing and sales channels. All decisions with far-reaching consequences that sometimes caused a bit of upset. There were around seventy brands when I started. Now we have a portfolio of twelve brands, including new brand Carqon (e-bikes priced from € 5,000) introduced last year and the cargo bike company Velosophy, which was my first acquisition in 2018. Both very successful, fortunately!”

Profit and Planet are coming together nicely.

Growth
“The bicycle market across Europe is growing enormously. I expect it to go from 20 to 30 million units in the next ten years, including 18 million e-bikes. There are three factors, besides Covid, that have contributed to the fact that the market is growing so fast. One: electrification, two: governments are investing more and more in cycling infrastructure, and three: subsidies and tax incentives for cycling. In Germany and Belgium you have the same tax benefits for an e-bike as you do with an electric car. In the Netherlands, the benefits for employers and employees are still very limited. Yet it makes so much sense to encourage this through taxation! It saves huge amounts of money on healthcare and solves traffic jams and pollution problems.” It seems like a no-brainer to me, and Anbeek, too, can’t figure out why the Dutch government didn’t sort this out ages ago.

After studying Organisational Psychology in Utrecht and Business Administration in Rotterdam, Ton Anbeek started out as a salesman and brand manager with Unilever, where he went on to enjoy a glittering career that lasted almost twenty years. He left Unilever when he was CEO for North Africa and went on to become CEO at Auping. Just three years later he left for the listed company Beter Bed. Seven years later, in 2017, Anbeek was appointed CEO of the Accell Group, which comprises the Sparta, Batavus and Koga brands and many more.