The art of navigating

A series of conversations about marketing, management and brands between CEOs of major advertisers and major advertising agencies with Lodewijk van der Peet. This time we have Ruud van Munster, general manager of DA drugstores.

In preparation for the conversation with Ruud van Munster I spoke with several people who know him and I listened to an interview he gave to BNR Newsradio a few weeks ago. In it, he tells among other things, that the head office has moved to a much cheaper building in Lelystad. After all, considerable cuts had to be made.

This of course has to do with the bankruptcy in 2015, a subject that we will not discuss today. Old news. Thanks to the memorable words of the curator Mark Udink, I still remember the news reports about that bankruptcy: “It’s just like fish, you have to act quickly in case of a bankruptcy, otherwise it will be rotten.” The restart of DA had already been arranged before it went bankrupt and that of course caused some commotion.

Warm welcome
A few years ago I was allowed to come for an audience in the former head office in Amersfoort. That was an uninspired container that reminded me of how blessed we typically are with our workplaces as advertisers. The industrial estate where I now end up is extremely depressing. But then I suddenly see cheerful pink flags and banners fluttering between the grey concrete around a nice entrance. The contrast could hardly be greater. Ruud van Munster enthusiastically hops down the stairs to receive Kees Rijken and me. “How do you want your coffee? 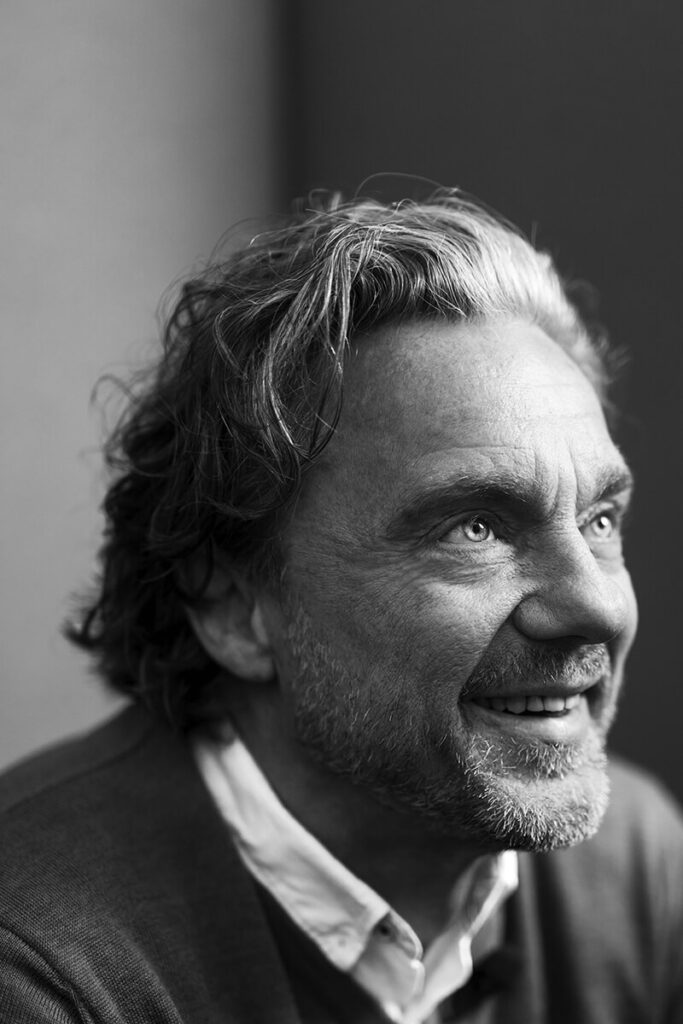 No softie!
Ruud van Munster has now been working at NDS, of which DA drug stores are part, for almost 3 years. At first briefly a commercial director, but he quickly obtained his doctorate and became general director. Nothing CEO, just delicious Dutch common sense; Managing Director. A marketer who takes the chair at the head of the executive table; I love it. Except for a handful of stores, all 320 branches are independent entrepreneurs. “You can probably imagine that they simply do not accept it if they are addressed by a Bobo from the service office.” That’s how I know Ruud (I can say Ruud); he immediately searches for common ground, is approachable and accessible. “We are not bothered by hierarchy here at all.” And that is perhaps the best way to describe himself.

Arguing is also a quality, I don’t control it. I’m almost certain that Ruud is even worse at it. “ No, I don’t look for confrontation that quickly, I am not polarizing or sharp in tone. ” I see that he has to think for a moment, his phone is ringing, he quickly turns it on silent, then looks me straight in my eyes and says firmly: “But I’m not a softie!”

Splits
During the conversations I had about Ruud, I heard exactly that qualification; “Incredibly nice guy.” Says one. “Sympathetic man, his favour factor is high.” Says the other. The three franchisees that I spoke unanimously about him as a human being; “Super cool guy, he takes his time for me.” And when it comes to his leadership: “That formula development is way too slow.” While another says: “Hardly to keep up.”
This clearly illustrates how complicated it must have been to turn 2 formulas into one profitable formula with generally satisfied entrepreneurs.

We are carefully tightening up the franchise formula

Hurry
Back to the marketer in the chair at the executive table. “Everyone has in their DNA what passion they started with, for me that has always been marketing and commerce. In the meantime, this has broadened somewhat, but the beating heart is still that of innovation, thinking from the perspective of the consumer and thus making speed. And you need that speed here!” 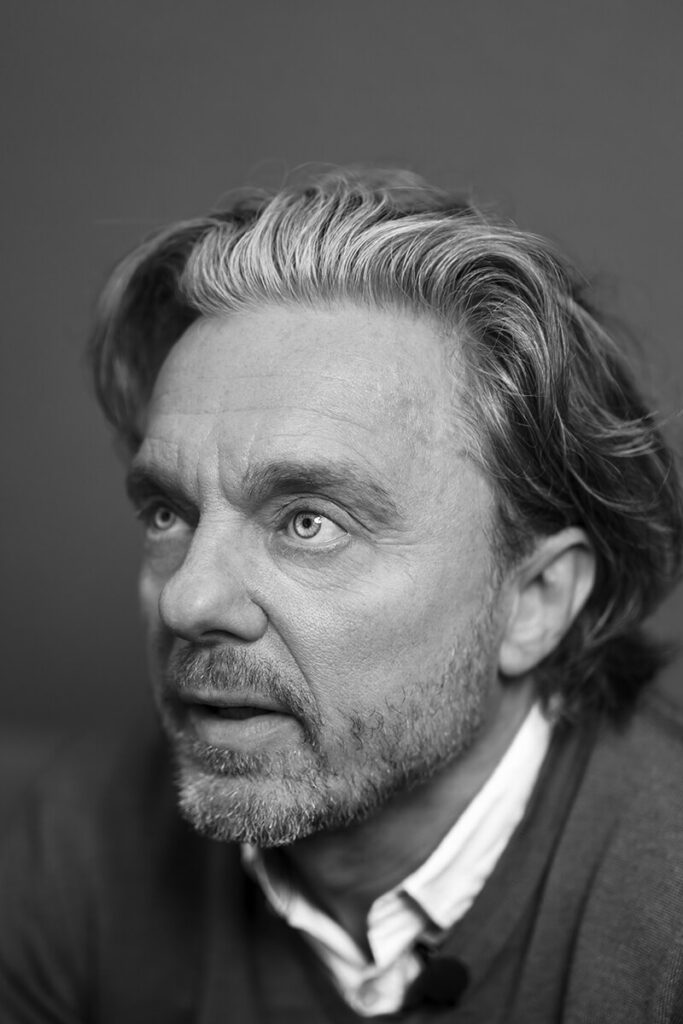 Tighter
“Our competitors are run as an affiliate company. On average, they have larger stores in prime locations and a much tighter formula. Our franchise formula is traditionally a less tight corset, we are dealing with entrepreneurs who use the formula to run their drugstore. As we continue to successfully roll out our new formula, we are carefully tightening up the franchise formula. Our formula fills in “health” much more broadly than we did before and also more emphatically than other drugstore formulas. You can now – without first making an appointment – have your blood pressure measured, your sugar pricked, your cholesterol and buy many more self-care products than before. The DA is a trusted address on the local shopping street and you usually know the qualified chemist personally. We also relieve the burden of care somewhat, if you know that an average of 8% of the general practitioner visitors is ‘minor suffering’ that we can take over or take care of.”

Closer to the people
In terms of the proposition, we are more or less on the same track of health in the industry. We just want to play a greater role in the health and vitality of our customers. I do think that we can fulfil that role better and better with our stores, especially because we, with our local stores, are closer to the people than others.”

I have the feeling that Etos puts more emphasis on beauty than on health and DA does exactly the other way around. “Beauty has always been filled in very well with us.” It is characteristic of Ruud that he does not address me in a corrective way. He calmly tells me how it works (there are no big differences according to him). “I imagine it can be a bit confusing, beauty versus health, but we define health as” feeling good “and beauty plays a very important part in that. If you think you look good, you feel better about yourself. ”

Convince
“We will not shove the new formula down our throats, the entrepreneurs simply would not accept that. We are sincerely convinced that the new formula will bring success for all of us. Within DA we have reached a joint agreement about who we are and who we would like to be and how we reach that point on the horizon together. If you work with ten entrepreneurs you have ten opinions, my job is to get all ten along and that worked out quite well. It’s a mentality, the formula is never finished. The formula continues to develop, so responsive retailing. ”

We are closer to people than our competitors

Oil between the gears
I will come back to his personality, his cordiality. And suppose he is exactly in the right place with those qualities, especially at the right time. “I am a people person who can quickly switch between different types of people, convince people and get them on board, I think I am good at that.” We emphasize the collective and think it is great that the individual entrepreneur takes a step to the left.
How do you motivate young people, entrepreneurs and how do you raise children? That just doesn’t work in an authoritarian way anymore! The fact that you are in charge is simply not enough anymore, you have to motivate and convince. I am convinced that every person has a conviction and a motivation to do something well, so I give a lot of space. ”

Teachers
The first names that come to mind when I want to know which marketers Ruud have remembered the most are Paul Postma and Willem Koch. Postma is a real data and Beta man, Koch is much more Alpha. Postma was one of the first to recognize the importance of good data and wrote many books about it. “I knew him well, very inspiring man.” Koch is a lover of design and photography; “I learned from him the importance of communication looking great.”

Favour factor
55 people work at the head office. When I compare that to AS Watson (about 800) and know how hard they have to work there, I am shocked. “It is very lean and means indeed. We have to do it smarter and make clearer choices. The cooperation with suppliers is also really different, we do not have a rock-hard purchasing model. And that does not suit us, if only because I cannot promise that the wishes that the suppliers have will be properly carried out in all 320 stores the next day. Our suppliers do have a special place for DA, we do have a favouring factor because they see that we are working very hard to make something out of it and that we are also achieving that. ”

As a chemist, we do something unique in the Netherlands

Criticism
I am somewhat critical of DA’s TV campaign. If you go on TV and your budget is small, why not make a sharp commercial with a lot of memory value? Ruud kindly dismisses my opinion. “I am very satisfied with that commercial. We have shown, in a unique collaboration with suppliers, how proud we are of our new formula and presented it to our customers on a medium where we had not been seen for decades. ”I sputter a bit, but there is no way to pin it.

Relevance
“I have worked at various companies and I feel that the social relevance is greatest in this place. Because we want to play an important role in the health and vitality of consumers, we can make a difference. As a chemist, we do something unique in the Netherlands, something that has never been done before. That is very motivating.”

Rewards and loyalty programs
Driving repeat purchases and loyalty utilizing a central loyalty program, we have done little from the head office, until now. Short-term savings campaigns are regularly organized to reward purchase frequency and loyalty, but this was mainly done locally. The fact that we didn’t have any room yet has not so much to do with that discipline, because I believe in it, we were just too busy rolling out the new formula. Now we are ready to think better about things like that.”

Ruud van Munster started his career at ABN AMRO as a marketing coordinator in late 1992. In 1995 he started at KPN and a little later he became marketing manager at PTT Post Media service (now PostNL). This was followed by Shell for ten years, where he had various international retail roles, including European Brand & Communications boss and global responsibility for loyalty and convenience retail supply chain. In 2012 he worked at Markeur (automotive) where he became holding director in 2015. Then followed 2 years of rock-hard retail at Dirk (Detailresult group) as marketing director. In 2018 he switches to DA, which is part of Mosadex.